A logical solution to reduce our GHG emissions: smaller vehicles

There’s no denying it, SUVs are very popular in Canada. And there are many often-cited reasons why people buy them: the rough Quebec winters, our vast country, the need for increasingly spacious vehicles to transport our families.

But let’s take a step back. Our country hasn’t grown any larger, our winters are increasingly mild and we’re generally having smaller families than we did 30 years ago. Yet between 1994 and 2019, the size of the vehicles on our roads increased by 25%. Thirty years ago, a one kilometre-long stretch of road could fit 10 more vehicles than it can today!

Next time you’re walking around your neighbourhood, take a look at the cars and you’ll see that owning a large vehicle has become the new social norm. The trend is clear for all demographic groups towards the largest models of vehicles. 81% of new vehicles sold in 2021 were SUVs and other light-duty trucks. And no, it is not only in rural regions.

This trend raises all sorts of troubling issues, and not only from an environmental standpoint: 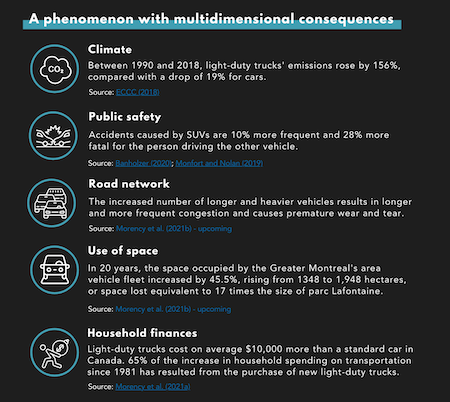 Équiterre, in collaboration with a renowned group of research organizations, led a far-ranging study and a series of reports to shine a light on these issues. The research sought to understand why SUVs are so increasingly popular in Canada, the consequences of this trend, as well as to explore possible solutions to reverse it.

There is no disputing the findings: our needs haven’t really changed, but our perceptions have. And this is partly due to advertisements that nourish a narrative linking drivers to nature, adventure and freedom. Sound familiar? These ads also conveniently leave out the vehicles’ GHG emissions and the total price of the vehicle. They hardly contribute to informed decision making!

Victimized by the influence of an omnipresent industry

Through multi-billion-dollar campaigns to influence our perceived needs and desires, the automobile industry has made the SUV Canada’s family vehicle.

The scientific consensus is clear: advertising has a significant influence on our choices as consumers. A few noteworthy facts help to paint a clear picture:

A new petition to reverse the trend!

We must change the social norm, starting with restrictions on automotive advertising. Unlike many other countries, the legislation regulating the sector in Canada does not yet include provisions for environmental protection. This has to change! It’s a question of consistency. The federal government has set climate and electrification targets, while at the same time allowing massive vehicle promotion to run over its goals.

And we can’t forget the role that the media plays in this. The petition also calls on the board of directors of the Canadian Broadcasting Corporation (which is subsidized by the government) to update its advertising policy and stop broadcasting ads for gas-powered vehicles.

When tobacco products were recognized as a public health issue, we restricted advertising on them. Let’s do the same for gas-powered vehicles. Together, we can reverse the trend!